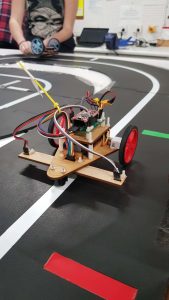 For the unit EGB220 at the Queensland University of Technology a three wheeled, back wheel drive robot capable of following a 19mm wide white line on black backing was created. In addition to this, the device was able to map the course that it was driving on and respond to changes in the track, such as accelerating on straight sections of track, stopping at the end of a lap and slowing down in designated slow zones. All this behaviour was completely automated, allowing the device to be placed on an unseen track. It features custom PCB’s and a custom chassis. The final robot achieved a grade of 100/100 in the final demo.

The robot operates by reading a set of infrared light sensor, emitter pairs to analyse its current position relative to a white line. This data is then processed by an onboard microprocessor which then controls the speed of each of the two drive motors to turn the robot and ensure that it is centred over the white line. Two smaller sensors placed on either outside edge of the robot are used to detect edge markers. The detection of which can be used to enhance the robots’ perception of the track, such as the ability to detect straight sections of track, slow zones and start and stop markers.